This is getting redundant.

Denny Hamlin won the Sprint Cup pole on Friday, then was fastest in Saturday’s morning practice at Dover International Speedway.

And to cap things off, Hamlin was fastest in the final Cup practice Saturday afternoon with a speed of 156.087 mph.

What’s next, a win in Sunday’s FedEx 400 Benefitting Autism Speaks? It sure is starting to look that way.

But it wasn’t just Hamlin who was strong – it was a massive show of strength from Joe Gibbs Racing and Toyota in the final practice as well.

The only driver to prevent a 1-2-3-4 JGR showing was Paul Menard, who was third-fastest (155.206 mph) in his Richard Childress Racing Chevrolet.

The session was originally scheduled for 50 minutes, but was extended for an extra five minutes due to an incident at the start.

Dale Earnhardt Jr. inadvertently spilled fluid from his race car that splashed all over the pit road apron and onto the windshield of several cars, prompting a caution for cleanup.

Earnhardt’s crew fixed the problem and he was back on-track for the remainder of the session. 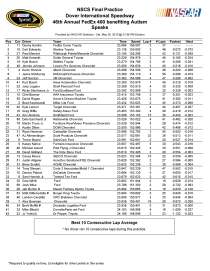