No surprise there, as Johnson is the all-time winningest driver (9 victories) at Dover.

But what was surprising was the onslaught behind Johnson: Five of the first seven fastest drivers were Toyota pilots.

Sandwiched in-between was the only other Chevy driver in the top 7, Dale Earnhardt Jr. (163.473) was third-fastest.

Most of the 45 drivers on the grid were practicing in qualifying form, as qualifying is set for 3:45 pm ET this afternoon.

Here’s the results from Friday’s practice (there are two more practice sessions on Saturday): 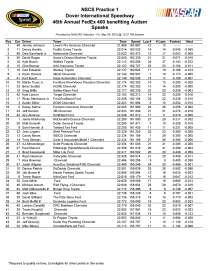