There’s something about tracks with the initials “DIS” that seem to bring out the best in Camping World Truck Series driver Tyler Reddick.

The 19-year-old from Corning, Calif., won his first career Truck race to start this season at Daytona International Speedway.

He earned win No. 2 Friday afternoon in the Lucas Oil 200 at Dover International Speedway.

Reddick took the lead from Erik Jones, who had led the previous 50 laps, on Lap 193 and held on for the remaining seven laps to earn the win.

“We just bid our time and were very patient,” Reddick said. “We played it smart, kept her in one piece and went to Victory Lane.”

“My Toyota was pretty strong,” Suarez said. “Something very important here was traffic, track position. It was difficult to pass.”

Added Jones, “We got so free and I just couldn’t hang on to it. I did all I could. We had a good Toyota Tundra and it was still a good points day.”

How Reddick won: Reddick paced himself and saved as much fuel as he could as he followed in the track prints of Erik Jones from Lap 143 to Lap 192. Jones’ truck started to get loose and Riddick pounced at the chance, passing underneath and motoring on to victory.

Who else had a good day: Daniel Suarez once again came so close to winning for the first time ever. Although he didn’t lead a lap, Suarez stuck around the top 10 much of the race and then came on strong in the closing laps to overtake Jones for second. … Kannapolis, N.C., native Daniel Hemric recorded a career-best fourth-place finish. … Even though he fell back, pole-sitter Ryan Blaney had a strong day, leading 33 laps before finishing seventh.

Who had a bad day: He was hoping for a good day in his NCWTS debut, but Jesse Little made a costly mistake 32 laps into the race, losing his truck and collecting three other trucks with him (Mason Mingus, Justin Jennings and John Wes Townley). “This is exactly what I was trying not to do, it’s something that kind of sets us back, but I learned, that’s what it’s all about and we’ll get ‘em next time,” said Little, son of former NASCAR racer Chad Little, who is now NASCAR Managing Director, Technical Inspection/Officiating.

Notable: Jennifer Jo Cobb could be in trouble with NASCAR for her actions following a wreck on Lap 13. After wrecking, she got out of her truck and walked up on the racetrack, gesturing at Riddick, who she apparently believed tapped her. Cobb was called to the NASCAR hauler.

MORE: Jennifer Jo Cobb wrecks in Truck race at Dover, is called to NASCAR hauler for her actions

Quote of the day: “I just forced an issue that I shouldn’t have. I was driving up under the 15 and I knew the truck was real sensitive aero, but I didn’t know it was that much. I just got loose and it brought me around. There’s not much you can do after that.” – Jesse Little, who admitted the wreck on Lap 32 of his NCWTS debut was solely his fault. 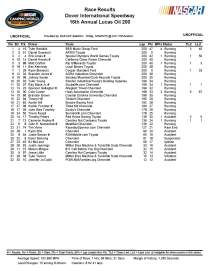 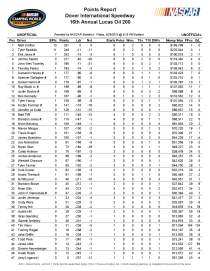