In the Camping World Truck Series’ only practice session for Friday’s Lucas Oil 200, Erik Jones was the fastest with a speed of 155.885 mph around Dover International Speedway.

After having been dethroned from the top spot earlier by Jesse Little, Jones reclaimed the top speed on his 67th and final lap around the 1-mile track.

The Truck Series will be back on the track Friday at 12:45 p.m. ET for qualifying, which airs on Fox Sports 1. 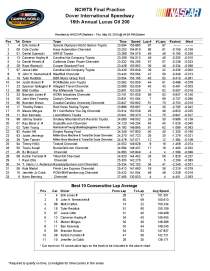