This weekend’s Xfinity race at Dover International Speedway will reward a driver with a $100,000 bonus as part of Xfinity’s Dash 4 Cash program.

Ty Dillon, Regan Smith, Daniel Suarez and Darrell Wallace Jr. qualified for the bonus at Dover by being the four highest-finishing drivers who score points in the Xfinity series last weekend at Charlotte Motor Speedway.

If a driver wins each of the first three Dash 4 Cash events and then wins the final race outright at Darlington, they’ll increase their winnings by $600,000 to make their total winnings $1 million.

Fans also have a chance to win. For how to win and more information on the program, go here. 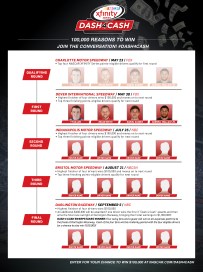