There are thirty-four trucks entered into the sixth Camping World Truck Series race of 2015, at Dover International Speedway.

Among the entrants is Ryan Blaney, driving in his first Truck race of 2015 in Brad Keselowski’s No. 29 Ford sponsored by Cooper Standard.

Kyle Busch is not entered and won’t be able to extend his stretch of three wins in the last four Lucas Oil 200 races. 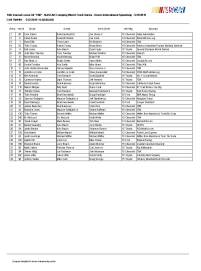