Harvick continues to hold the edge on second-ranked Martin Truex Jr., whose fifth place finish in the race allowed him to pick up fie points on Harvick and is now 41 points behind.

In his first points-paying race back after suffering a broken leg and fractured foot at Daytona in February, Kyle Busch is already up to 41st place in the standings after finishing 11th in Sunday’s race.

Busch just needs to reach the top 30 and win a race before the cutoff after the September race at Richmond International Raceway to qualify for the Chase for the Sprint Cup.

Here’s how the driver standings look after the Coke 600, which marked the 12th race and the end of the first third of the 36-race season: 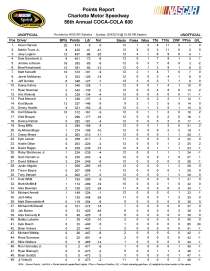