Austin Dillon charged his way back to the front during a 34-lap shootout to win the Hisense 300 at Charlotte Motor Speedway for his second Xfinity Series win of 2015.

“I didn’t want to get out of this thing,” Dillon told Fox. “It drove so good and it was a heck of a race at the end there with Denny (Hamlin) and Kasey (Kahne). I had to go right there in lapped traffic, because I knew If I didn’t hurry up and get in front of him, the tires might equal out or something.”

Dillon passed Hamlin with 15 laps remaining and wouldn’t be challenged the rest of the way.

Dillon was followed by Hamlin, Kasey Kahne, Regan Smith and Darrell Wallace Jr, who notched his career-best finish in the series.

Hamlin, racing in his final event in the No. 54 Toyota before handing it over to Erik Jones, finished second despite having to pit for a loose wheel on Lap 88 during a green-flag run.

“Austin did a great job coming back there,” Hamlin told Fox. “I’m happy with a second-place finish considering what I  thought we had for a car all day. I thought we were probably a fifth- or sixth-place car at best, but we were able to get a good restart and try to hold those guys off, but (Dillon) had just a little too much speed for me.”

How Dillon won: Dillon restarted fourth with 34 laps remaining and picked off Kasey Kahne for second with 24 laps left. Dillon took the lead for the last time with 15 laps left when Denny Hamlin went high around a lapped car out of Turn 4. Dillon went to the inside to make it three-wide and took the point going into Turn 1.

Who else had a good day? Daniel Suarez finished sixth after starting 19th. The Joe Gibbs Racing driver had his No. 18 Toyota in the Top 10 for much of the race. After staying out of the pits during a Lap 111 caution, restarted second and would manage to stay in the top 10 for the rest of the race. … Chase Elliott finished eighth despite having to change a battery and pit a second time during the same caution period around the race’s halfway point.

Who had a bad day?: After starting third, Austin Dillon’s teammate Brian Scott found his day end in 20th, three laps down after dealing mechanical issues. … Kyle Larson was a front-runner early, but then spent part of the race in the garage for a broken rear shock mount. Larson finished 33rd, 17 laps down.

Dash 4 the Cash: The top four Xfinity Series regulars to score points in Saturday’s race qualified for the Dash 4 the Cash, which continues as Dover International Speedway. Those drivers are Regan Smith, Darrell Wallace Jr., Daniel Suarez and Ty Dillon. The four will compete for $100,000 at Dover.

Notables: Darrell Wallace Jr. earned his first career top-five finish in the Xfinity Series with his fifth-place finish. It was Wallace’s first Xfinity race at Charlotte. … All four of Austin Dillon’s Xfinity Series wins have come after starting from the pole. Dillon also recorded his third-career perfect driver rating of 155.0.

Quote of the day: “I’ve very happy with everyone at Joe Gibbs Racing on this ARRIS Toyota. All these guys, they don’t know how to give up and that’s something that is really good and I’m learning to be just like that as well.” – Daniel Suarez, sixth-place finish. 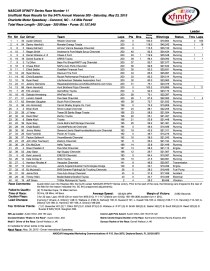