Preparing for his first Xfinity Series start at Charlotte Motor Speedway, Darrell Wallace Jr. put up the fastest speed in the first practice for the Hisense 300.

Wallace recorded a speed of 180.536 mph in his No. 6 Cheez-it Ford for Roush Fenway Racing. 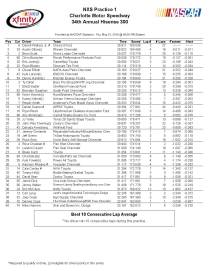