They’ll start with lunch, catching up and sharing stories about back in the day. The 50 or so voters in attendance then will gather for a group photo before the work begins.

I know. I’ve been there. I was a NASCAR Hall of Fame voter for the previous six classes.

What happens behind closed doors is fascinating, leading to the 6 p.m. ET announcement of the 2016 class on NBCSN’s NASCAR America.

Each year the temperature of the voting room changes. The inaugural year featured a mesmerizing debate on if Bill France Jr. should join his father in the inaugural year. The discussion went back and forth like a tennis match.

Other years, the debate can turn into a push for a particular candidate by a person or small group. Words are never heated, but passion underscores the debate.

How will voters select the next five inductees among 20 nominees?

Take a look back to last year’s vote. The 2015 Class features all drivers – the first time it had happened: Bill Elliott, Fred Lorenzen, Wendell Scott, Joe Weatherly and Rex White.

Only 12 of the 20 nominees this time are drivers.

This could be the year an owner – or even two – gets in and/or a crew chief such as Harry Hyde or Ray Evernham. It’s been two years since voters selected someone who worked on the cars (engine builder Maurice Petty) and that could be a factor.

Another good clue is look at who were the highest vote getters who didn’t make it the previous year. Every year at least two of the four highest in votes who failed to make the Hall the previous year, make it the following year. Scott and Weatherly ranked in the top three who missed the cut for the 2014 Class but were elected to the 2015 Class.

It wouldn’t be surprising to see at least two of those three make it this year – if not all three.

Robert Yates is among five cars owners among the nominees. Rick Hendrick and Richard Childress have more championships but they’re still competing – and to some voters that has been reason enough to not vote for them even though both are deserving. With an influx of new voters this season, it will be interesting to see if that philosophy remains. If not, this could be Hendrick’s year. 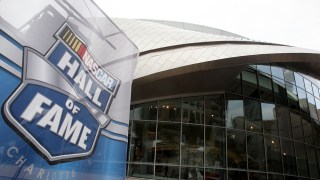 Where Yates could hold advantage is that he was an engine builder and a champion owner. Voters like nominees that fall into multiple categories. If the voters decide to go back to earlier in the sport’s days, Ray Fox (engine builder, owner and official) could be that choice. Parks would need a big swing to be a candidate. There was a push for him for the 2012 class but little since.

Another topic that has come up in the discussion through the years is that this is the NASCAR Hall of Fame not Sprint Cup Hall of Fame. The point, some will note, is that there needs to be a driver from outside Cup to be in the Class.

In 2012, modified driver Richie Evans was the first non-Cup driver to make the Hall. In 2014, Jack Ingram, who drove in what is now the Xfinity Series, was selected.

There’s a pattern. This year there’s four non-Cup drivers among the nominees – Jerry Cook, Hershel McGriff, Larry Phillips and Mike Stefanik. This could be Cook’s year. He’s been among the top two receiving votes who didn’t make the Hall in each of the last four years. Voters could reward him after being so close before.

Parsons is an interesting case. He has one championship but many people recall him for his TV work as the sport grew in popularity. To many fans, he was a friend who came by on Sundays when the race was on and even shared some food tips in his jovial manner. Again, he’s an example of someone who can be viewed in multiple roles as a driver and a TV broadcaster.

If Parsons makes it, that could leave two spots.

Some will vote for Terry Labonte because the two-time champion is the only multi-time Cup champion eligible for the Hall not yet in.

What could hurt him is if voters decide to honor a driver from earlier in the sport’s history. Curtis Turner never won a title – having been barred from the sport for more than four years when he tried to unionize the drivers – but is considered among the sport’s greatest drivers. Or Bobby Isaac, the 1970 champ. His 37 wins are more than any other driver nominated this year.

And of course there are wild cards. If a nominee is in failing health, it could sway a few voters, who would want that person to get the chance to experience entering the Hall.

Another point for some voters is what nominees would do the best job promoting the Hall. If voters go with at least a couple of nominees who are deceased, one spot could go to someone they think could help draw people to the Hall of Fame. Would that be a Hendrick, Childress or Yates? Labonte, Buddy Baker or Mark Martin? Evernham?

If that becomes a key issue for some, it could help provide Hendrick with additional votes and be enough to get him in the Hall this year.

While one can never tell what direction the room is going until discussions start, here’s how the 2016 Hall of Fame Class might look – Robert Yates, Jerry Cook, Benny Parsons, Curtis Turner and Harry Hyde.