Hamlin and his Toyota will start from the pole for the first time in All-Star Race history, having a field-best speed of 145.648 and a best time of 1:51.227.

“I felt like I got everything,” Hamlin, seeking his first All-Star victory, told Fox Sports 1. “We’re hopefully going to go for a million.”

The qualifying session involved three laps, including a four-tire pit stop. In addition, there was no speed limit onto or off pit road during the pit stop.

The total time each driver achieved determined their starting position.

Biffle, the second-to-last driver to make a qualifying run, recorded a speed of 144.643 mph at 1:52.000 in his Ford. Biffle won one of the two segments in Friday night’s Sprint Showdown to transfer into the All-Star Race.

All 20 drivers in the field are vying for a $1 million first prize. The 110-lap race will be divided into four 25-lap segments, followed by a 10-lap sprint to the finish.

One of the last qualifiers, Clint Bowyer, grabbed the fourth spot with a speed of 144.256 mph at 1:52.300. Like Biffle, Bowyer won the other Sprint Showdown qualifying segment on Friday to transfer into the All-Star Race.

“Holy crap,” a seemingly incredulous Patrick said on her team radio after learning where she qualified.

Patrick’s fortune didn’t last. An engine change will force her to start at the rear.

Reigning Sprint Cup champion Kevin Harvick will start last (20th after being penalized five seconds when his jackman inadvertently lost his balance atop the pit wall and stepped onto the pit box before Harvick arrived.)

There were no incidents in the 20-car session. 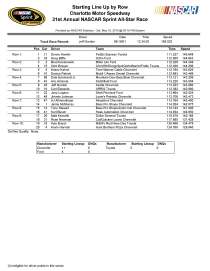