While it will have 14 fewer drivers (29 instead of 43) than a normal Sprint Cup race starting field, tonight’s Sprint Showdown will be as competitive as any points-paying race — maybe more.

After all, there are two prizes for the winner of each segment.

First, each gets to advance to Saturday night’s main event, the 31st annual Sprint All-Star Race.

Second, by virtue of advancing, the two Showdown winners — as well as whichever driver wins the Sprint Fan Vote — will have a shot at the $1 million first prize for winning the All-Star race. 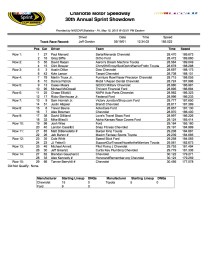