Jeremy Lange couldn’t see the fire damage when he arrived at Leavine Family Racing’s shop at 6 a.m. Sunday because there was no power in the building.

When the sun rose, damage from Friday’s fire became evident.

“It was a bit challenging to see,’’ Lange told NASCAR Talk on Monday afternoon.

Four of the team’s 12 cars were destroyed. Tools, parts and pieces were ruined. Ash and soot covered cars and equipment. Heat from the fire had melted windshields and popped tires.

Yet, Leavine Family Racing will compete this weekend in the Sprint Showdown at Charlotte Motor Speedway.

“We won’t let this define us as a race team,’’ Lange said. “Friday was a tough day and it’s still tough for the guys because they haven’t been back here. At the end of the day, we’ll get better and we’ll focus on the Showdown and the 600.’’

Lange was with the team at Kansas Speedway when fire crews from Harrisburg, N.C., and Concord, N.C., were called at 7 a.m. Friday to the race shop, located near Charlotte Motor Speedway. More than 30 firefighters were deployed to contain the fire. An investigation into the cause of the fire continues.

Michael McDowell finished 36th at Kansas and the team arrived back in the Charlotte, N.C., area Sunday morning.

Friday’s fire was contained to the back of Leavine Family Racing’s shop and Lange said he’s hopeful to be back working in the shop shortly after the Coca-Cola 600.

The team, which is running a partial schedule, already had planned to race at Charlotte the next two weekends and skip races at Dover, Pocono and Michigan before returning at Sonoma in late June. The fire does not change that schedule.

Lange said the cars destroyed were to be used as backup cars for upcoming races – the primary cars are located elsewhere in the building and were not damaged by the fire. One of the cars destroyed had been used at Sonoma previously but the team was planning on a new car for that race. 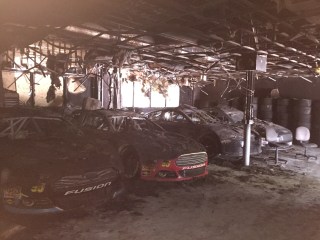