It’s a logical conclusion that NASCAR drivers become champions because they perform better than their peers across a wide spectrum of racetracks.

While they may like certain types of tracks, be they short, mid-range or superspeedways, their overall performance suggests superiority on tracks of all sizes.

To become a champion, they have to – and typically do – perform equally well across the board, whether it’s at this week’s venue, Richmond International Raceway, or next week’s, Talladega Superspeedway.

A new study by Andrew Maness of PitRho, a racing data and analytics firm, proves that point, wrote Eric Chemi and Mark Fahey on CNBC:

“It appears that champion-winning drivers perform about the same on a short track (under 1 mile) as they do on longer tracks. For non-champion drivers, the effect is much more pronounced, as their performance is more track-dependent.

“For every driver that has won a championship since 2002, their average finish on long tracks and short tracks is basically the same—either zero or one position different.”

But with other drivers, there can be notable differences.

For example, Kyle Larson, who grew up racing on short tracks, actually has performed better on longer tracks (1.5 miles or more) thus far than on NASCAR short tracks.

Then there are drivers such as Ryan Newman, Clint Bowyer and Denny Hamlin. They, too, grew up on short-track racing, and their NASCAR statistics indicate that they perform better overall on a short track than a 1.5 miler or larger.

“It’s an interesting way to try to delineate between the elites and the next level down: What makes a champion?” PitRho co-founder and former NASCAR crew chief Josh Browne told CNBC. “Track length DOES matter for some drivers—but the elite guys like Harvick and Johnson are just good everywhere.” 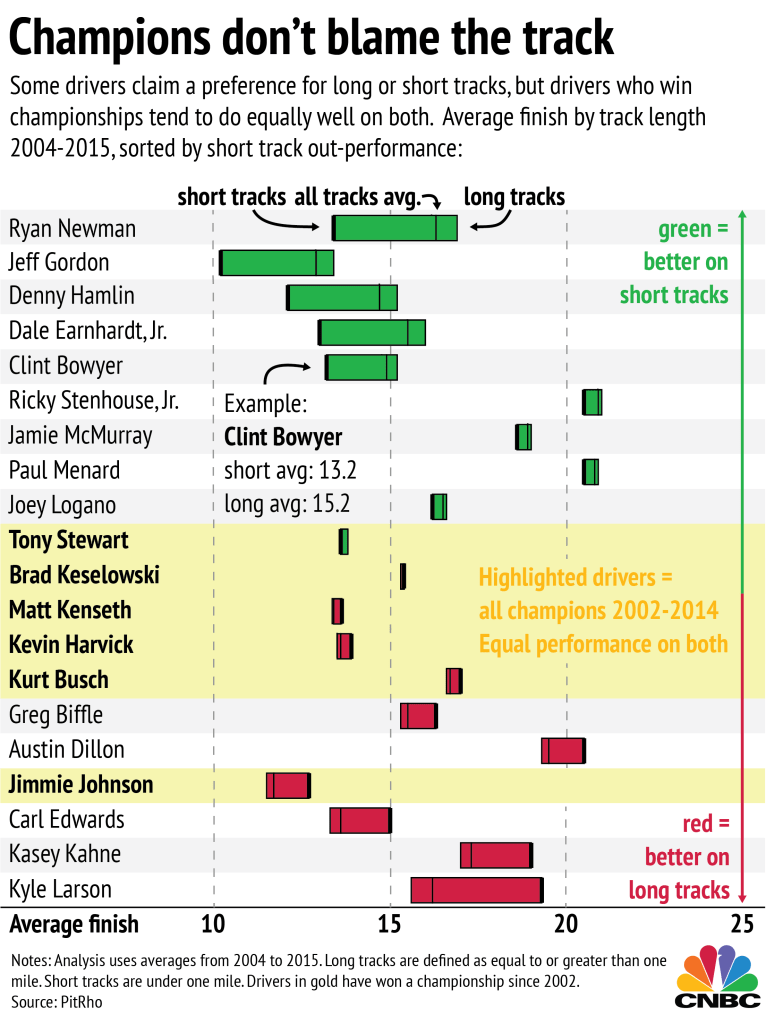