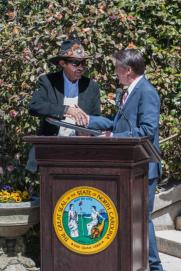 Tuesday wasn’t only the last day of March, it also was “Richard Petty Day” in North Carolina.

Per proclamation of Gov. Pat McCrory, Petty was honored at the Executive Mansion in Raleigh, N.C.

“It’s an honor to have ‘The King’ of NASCAR here today to celebrate what Richard has accomplished for motorsports in our state,” McCrory said in a statement. “Richard retired in 1992 with the impressive record as the most decorated driver in NASCAR history.

“Not only that, but off the track he and his family have made great contributions to our state. One such contribution is Victory Junction, a camp which has brought joy to thousands of families of children with serious illnesses and medical conditions.”

Petty, who will turn 78 on July 2, is the winningest driver in NASCAR history with 200 victories. David Pearson is second with 105.

Petty and the late Dale Earnhardt are tied with a record seven championships on NASCAR’s premier level.

“It’s an honor to be recognized by the state where we’ve always called home,” said Petty, a native of Randleman, N.C. “It makes you feel good to be honored by the people who serve your city, county and state. Our entire family has grown up and lived here all our lives and we always tried to give back to our community.  I’m proud and humbled by today.”

Joining Petty at the ceremony were his son (and NASCAR on NBC analyst), Kyle, as well as daughters Rebecca and Sharon. The State Senate and House of representatives also honored Petty’s late wife, Lynda (who died March 25, 2014), and late grandson Adam.

In addition to McCrory’s proclamation, the North Carolina General Assembly also honored Petty with its own resolution.

WHEREAS, Richard Lee Petty was born on July 2, 1937, in the Level Cross community of Randolph County, North Carolina; and

WHEREAS, after watching his father on the race track, Richard joined the National Association of Stock Car Auto Racing (NASCAR) and in 1959 was named NASCAR Rookie of the Year; and

WHEREAS, Richard Petty quickly became the most popular driver on the racing circuit due to his love of the sport, character, smile, approachability and appreciation for the fans; and

WHEREAS, Richard Petty retired in 1992 as the most decorated driver in NASCAR history, earning a record 200 career victories and 7 NASCAR Cup championships and today remains one of the most popular and recognizable figures in all of sports; and

NOW, THEREFORE, I, Pat McCrory, Governor of the State of North Carolina, do hereby proclaim March 31, 2015, as “Richard Petty Day” in North Carolina and commend its observance to all citizens.

IN WITNESS WHEREOF, I have hereunto set my hand and affixed the Great Seal of the State of North Carolina at the Capital in Raleigh this twenty-third day of March in the year of our Lord two thousand and fifteen, and of the Independence of the United States of America the two hundred and thirty-ninth.