Comcast Business also will be on Edwards’ car April 19 at Bristol Motor Speedway for the Food City 500. Comcast’s Xfinity brand will adorn the ride Sept. 27 at New Hampshire Motor Speedway and Nov. 1 at Martinsville Speedway.

“We’re excited about this partnership with Comcast as they continue to grow in the sport, and I’ve had a great time so far working with them in preparation for Las Vegas,” Edwards, whose primary sponsor is ARRIS for the rest of the season, said in a release. “I’m excited to continue to build the relationship with them this year and hopefully we can put them into victory lane.”

Edwards has driven in NASCAR’s premier series since 2004 and is in his first season with Joe Gibbs Racing. 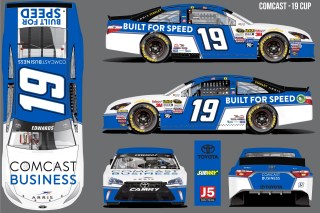 ““We could not be more excited to partner with Carl Edwards and Joe Gibbs Racing as a sponsor of the No. 19 in the NASCAR Sprint Cup Series,” said Matt Lederer, senior director of sports marketing for Comcast.  “Carl’s success on the track and his affinity for technology off the track makes him a great ambassador for Comcast. We are confident he will do an outstanding job representing our organization as well as our customers, and we can’t wait to kick off this relationship at Las Vegas.”

Comcast is in its first year as the entitlement sponsor of NASCAR’s Xfinity Series and as the official entertainment provider of NASCAR. Comcast also is the parent company of NBC Universal, which includes NBC Sports.